The Kassel-Dane Sister County Partnership is currently flying the German flag at the City County Building to commemorate the Day of German Unity (Oct. 3) and German American Friendship Day (Oct. 6).

President Ronald Reagan declared Oct. 6, 1983 as German American Friendship Day, or German-American Day, to commemorate the anniversary of the arrival of a group of German immigrants in 1683. The recognition is meant to celebrate German immigration and culture in the U.S.

County Board Supervisor Chuck Erickson (District 13) and Chair of the Kassel-Dane Sister County Task Force said recognizing the significant friendship between the US and Germany is more critical now than ever.

"Flying the German flag at the City County Building in Madison shows our support of the friendship of our two countries, while celebrating the reunification of Germany," Erickson said. "We value and appreciate our shared values with our friends in Kassel County, Germany".

Dane County, WI and the county of Kassel, Germany started a "sister county" relationship in 2007 regarding transportation, renewable energy, the arts and education.

The partnership between these counties fosters improvements in renewable energy, addressing climate change, training skilled workers and education. Since the relationship was established, it has also provided an opportunity for Dane County students to learn about German culture, including the opportunity to meet various German musicians. Students in Dane County high schools met the Kassel-based jazz band, The Edgar Knecht Trio, last September when the Trio visited Oregon High School. There was additionally a performance in Waunakee.

Charles James, member of the Kassel-Dane Sister County Task Force, and President of the Madison-Freiburg Sister City Committee noted that "both organizations enthusiastically support the "sisterhood" between Dane County and the County of Kassel on the occasion of the Day of German Unity and German American Friendship Day."

Kassel, a county with a population of approximately 193,000 has a regional transportation system, is home to a university and the Institute for Solar Energy Technologies. The area hosts a high-technology based economy, particularly traffic, logistics and renewable energies. Its main industries are systems technology for photovoltaics, the manufacturers of train engines and automotive factories for Volkswagen and Daimler-Chrysler.

Throughout the last 13 years, both Kassel and Dane County have remained committed to the goals in the original agreement that established the partnership. An example of this commitment is the multiple exchanges between both counties.

"With so many things happening in the world right now, having a shared commitment to share knowledge and experience is invaluable," Erickson concluded. 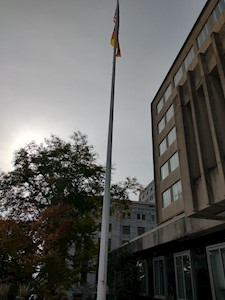