Construction Complete on Upgraded Digester Equipment to Convert 90,000 Gallons of Manure Per Day into Renewable Biogas

The first-of-its-kind in the nation renewable natural gas (RNG) offloading station at Dane County’s landfill has received its first load of RNG from a manure digester in the Yahara Lakes Watershed, Dane County Executive Joe Parisi announced today. Brightmark has completed construction of a multi-million-dollar project upgrading gas equipment at its digester northwest of Waunakee in the Town of Vienna.

The biogas converted from 90,000 gallons of manure per day will be trucked to the County’s offload station from the digester project.  The digester captures methane and phosphorus from manure, which reduces greenhouse gas emissions and harmful runoff to lakes and streams.  The digester’s biogas will be injected through the County’s equipment into the interstate transmission pipeline so it can be used as renewable fuel, powering fleets of RNG vehicles across the United States.

“Our project with Brightmark will help prevent greenhouse gas emissions from entering the atmosphere and significantly reduce phosphorus runoff into our lakes,” said County Executive Joe Parisi.  “I am hopeful that revenue from the sales of digester RNG will spur the development of more digesters and increase our lake clean-up efforts.”

In 2010, the County with state and private funding contracted for the building of the state’s first community digester, receiving manure from three family farms to improve the water quality of area lakes.  Brightmark‘s new investment will create both long-term project viability and increased manure treatment from additional dairy farms.

“This project demonstrates the power of a great partnership having significant positive environmental impact,” said Bob Powell, CEO of Brightmark. “We are excited for this work to come to fruition, as it will positively impact not only the climate but also the regional economy.”

RNG offers many climate benefits when compared to traditionally captured gas by drastically reducing the greenhouse gases (GHGs) associated with agriculture. During the anaerobic digestion process, methane is captured as biogas and converted, rather than being released directly into the atmosphere.  Research shows that when all climate benefits are considered together, RNG from dairy manure can reduce GHG emissions 400% when it is used to replace traditional vehicle fuels.

Methane is 25 times more potent to the atmosphere than carbon dioxide, and when used as renewable vehicle fuel, every trailer that comes through Dane County’s offloading station will reduce GHG emissions equivalent to that of burning 24,000 pounds of coal.  It is estimated that the project will deliver a trailer of gas to the landfill every two to three days. The new digester project will produce enough fuel to travel from San Francisco to New York and back over 200 times in a compressed natural gas vehicle.

The RNG offloading station was part of a larger project to process the County’s landfill biogas for pipeline injection.  Traditionally, each digester biogas producer is required to make a physical connection to the pipeline, which can cost millions of dollars for piping installation, equipment, and connection fees.  Since the County was already making that connection for the landfill biogas project, an offloading station was added for other biogas producers to use.  This revolutionary project reduces the barriers for biogas producers to gain access to a pipeline, renewable energy markets, and the U.S. Environmental Protection Agency’s (EPA) and state-issued renewable fuel credits.

The County’s offloading project was part of the 2018 budget and cost approximately $5.5 million for design, permitting, and installation.  Users of the offloading station will be charged a fee to pay back the costs of installation and fund the operation of the facility.  Price incentives are available for digesters in the Yahara Watershed who participate in advanced phosphorus removal to further help incentivize cleaning up area lakes.

In April, the County announced the first delivery to the RNG station from a digester in Fond du Lac County.  Dane County has the capacity to unload approximately 20 million gallons of gasoline equivalent per year. 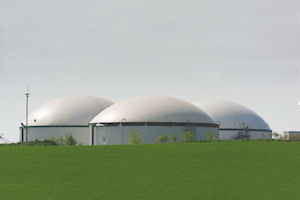 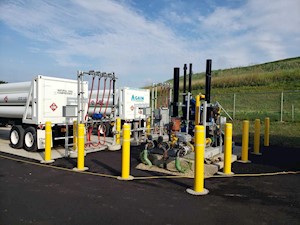